Andromeda is a major character of Clash of the Titans. She was portrayed by Judi Bowker in the 1981 film and by Alexa Davalos in the 2010 remake.

In Greek mythology, Andromeda was the daughter of Kepheus and Cassiopeia, king and queen of the kingdom Ethiopia. Her mother Cassiopeia boasted that she was more beautiful than the Nereids, the nymph-daughters of the sea god Nereus and often seen accompanying Poseidon. To punish the Queen for her arrogance, Poseidon, brother to Zeus and god of the sea, sent a sea monster named Cetus to ravage the coast of Ethiopia including the kingdom of the vain Queen. The desperate King consulted the Oracle of Apollo, who announced that no respite would be found until the king sacrificed his daughter Andromeda to the monster. She was chained naked to a rock on the coast.

Perseus was returning from having slain the Gorgon Medusa, he found Andromeda and slew Cetus by approaching invisible with Hades's helm and slaying him. He set her free, and married her in spite of Andromeda having been previously promised to her uncle Phineus. At the wedding a quarrel took place between the rivals, and Phineus was turned to stone by the sight of the Gorgon's head.

Calibos, son of the sea goddess Thetis, is a young man engaged to marry Princess Andromeda, the daughter of Queen Cassiopeia and heir to the rich city of Joppa; but has destroyed diverse creatures including most of Zeus's flying horses (excepting only Pegasus). To punish him, Zeus transforms Calibos into a satyr-like creature later exiled by his people. In revenge, Thetis transports Perseus from Seriphos to Joppa, as payback to Zeus for deforming her son, where he learns that Andromeda cannot marry unless her suitor successfully answers a riddle, whose failures are burned at the stake. Perseus, wearing a helmet that renders its wearer invisible, captures Pegasus and follows Andromeda to learn a new riddle from Calibos. Perseus is nearly killed by Calibos but escapes, losing his helmet in the process.

Perseus presents himself as suitor and correctly answers the riddle, presenting the severed hand of Calibos - Calibos' ring is the answer to the riddle. Perseus wins Andromeda's hand in marriage. Calibos, finding that Thetis cannot act against Perseus, instead demands that she take vengeance on Joppa. At the wedding, Queen Cassiopeia compares Andromeda's beauty to that of Thetis herself, whereupon Thetis demands Andromeda be sacrificed to the Kraken on pain of Joppa's destruction.

In the early stages of the film, Perseus is brought before King Kepheus and Queen Cassiopeia who are celebrating the campaign against the gods. The revelry is cut short by the arrival of Hades, who has been given leave by Zeus to punish the mortals for their defiance of the gods. Hades proclaims that in the upcoming solar eclipse, he will unleash the Kraken against Argos unless the Princess Andromeda is offered as a sacrifice. Before leaving, he reveals that Perseus is a demigod, the son of Zeus.

While Perseus is flying back to Argos after beheading Medusa, Andromeda, back in Argos was tricked my her servant, Ammon, in escaping the Royal Palace from the masses of Argosians, lead by Prokopion, who aim to sacrifice her rather than let the whole city suffer at the hands of the Kraken. As revenge for leading Andromeda to them, Peshet, the personal maid of Andromeda killed Ammon, though she was also killed in the process.

After defeating the Kraken, Perseus dives into the sea and rescues Andromeda, now the Queen of Argos. She asks him to stay by her side as King, but he claims he is not a leader, but simply a man. Her people will respect her as their Queen.

10 years after the events of Clash of the Titans, Andromeda is now the Warrior-Queen of Argos and is currently waging war against the masses of evil which are escaping from the Underworld. When Perseus comes to her for guidance to the Underworld, she introduces him to her past fiancé, Agenor. She chosses to accompany Perseus to the Underworld and she, and a few of her Legion begin their journey. 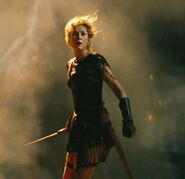