Ares is the Greek God of War. He is the son of Zeus and Hera, and half-brother to Athena. Ares was a difficult character and unpopular with the other Gods and Humans. He often fought with Artemis, Goddess of The Hunt, and with his sister Athena. Ares' symbols are the spear and dogs. Ares has no wife and is constantly under the spell of the Goddess Aphrodite, much to the annoyance of her husband Hephaestus. Ares and Aphrodite had four children together, Eros, Deimos, Phobos, and Harmonia. Ares also had many children by mortal women.

He has no major role in the movie, he is portrayed by Tammer Hassan. In a deleted scene Ares is amongst those calling for war on the humans.

At some point after Perseus defeats the Kraken, Ares begins to resent the attention that Zeus is showing towards Perseus. Ares sees this as favoritism, which over the next ten years turns him into a hateful and spiteful deity.

"Where is my brother Perseus? Gone fishing?" - Ares

Ten years later, Ares has lost any semblance of sanity, as he now hates both his father and Perseus. Ares soon turns to Hades, knowing that Hades has his own quarrel with Zeus. Hades already has a plan to hand Zeus over to Kronos, as the Titan King is due to break from the Underworld. Therefore Hades instructs Ares to apprehend his father.

Ares first appears with Poseidon as they await Zeus. When his father arrives, Ares mildly asks why Perseus has not joined them on such an important mission. Zeus ignores the question and brushes past him. At the gates of Tartarus, Ares remains on the sidelines while his father and uncles converse.

Once the Makhai attack the Gods, Poseidon is wounded by a fireball to the chest. Ares then springs his attack and catches Zeus off guard. With his hammer he knocks Zeus out cold and steals his thunderbolt as a prize. When Zeus recovers, Ares is already binding him in chains. Zeus asks why he has betrayed him, but Ares coldly answers "Only when it suits you, you remember I am you son?"

Zeus reacts angrily when he learns of the deal with Kronos. Ares tries to silence him, but Hades wants to hear him out. Ares asks if Hades backtracking, but Hades simply reminds Ares that he should obey his command while he is in the Underworld. Ares relents and watches his father argue with Hades.

"We are brothers, but not equal!" - Ares denounces Perseus

Ares drags his father to the precipice where Kronos awaits. As he binds his father to an altar, Zeus mocks him for following orders. Ares asserts he is his own master, but Zeus notes that only humans have free will. Ares becomes angry again and punches his father repeatedly. He rages that Zeus shows more favoritism to Perseus. Zeus expresses dismay at how Ares has fallen, but this does not help as Ares continues to assault his father. Hades orders him to desist, but the mad war God ignores him. Hades becomes angry in turn, so he knocks Ares down and holds the pitchfork to his face. Ares protests that Hades should not be so merciful, but Hades retorts "Your weakness is your blind hatred for you father! And your brother!"

Ares is sent away so that he and Zeus are separated. However, he later hears Korrina praying to him for luck, even though Korrina was warned not to do so. Ares falls from the sky and lands in front of Perseus and Andromeda. The Queen's soldiers immediately attack him, but Ares kills them. Perseus calls Ares a traitor, but Ares is unfazed as he feels that Zeus betrayed him, which earns him a punch in the face from Perseus. Ares gives him a punch in return and goes on a rampage. With his hammer, Ares knocks down Perseus and Agenor. After shoving Andromeda aside, he then kills Korrina as Hephaestus.manages to open the door to the Labyrinth. Hephaestus then confronts Ares to give Perseus, Agenor and Andromeda a chance to escape by entering Tartarus. Ares throttles Hephaestus before throwing him down. But Ares is caught off guard when Agenor hits him with the trident, wounding him. As the others escape, Ares uses Zeus' thunderbolt to kill Hephaestus.

Later on Ares returns to Tartarus just as Zeus is apologising to Hades. Evidently eavesdropping, Ares brazenly knocks Hades away from Zeus, believing that Hades is now getting cold feet. Ares tries to use Zeus' thunderbolt, but Zeus forbids the weapon from activating, which frustrates him. Ares is then attacked by a furious Hades, who whacks him with the pitchfork. Ares tries to fight back, but Hades knocks him over the cliff edge. Ares falls several stories before he crashes down on a lower ledge, which injures him but he still survives.

After he recovers, he heads back to the altar and finds that Perseus and the others have arrived. Perseus breaks Zeus free of his shackles. Ares then descends on the group, knocking Agenor aside and blasting Andromeda away. His rampage is cut short when Hades pins Ares down. Zeus and the others get away, but Ares puts up a struggle. Hades tries to stab him with the bident, but Ares narrowly rolls aside and seizes the weapon. As he regains his feet, Hades has him trapped in an arm-lock. Unable to break free, Ares hurls the pitchfork into Zeus' back. Ares pulls away from Hades, but decides not to engage his uncle any further as Tartarus is crumbling around them. Ares tries to go after Zeus, but too late as father teleports out of the Underworld. Ares then notices a fallen dagger, which Helius gave to Perseus

"So this is what a father would go through for his son?" - Ares observes Perseus' struggle

Ares later hears Perseus praying to him, challenging him to a fight in the temple of the Gods. Ares answers the call, but he first kidnaps Helius and brings him to the temple. When Perseus arrives, he is horrified to see Helius standing with Ares. but Ares affirms that he is not going to hurt the boy. Instead Ares wants Helius to know the pain of losing a father, just as Ares irrationally believes that Perseus stole Zeus' attention. Ares and Perseus do battle, in which Ares overwhelms his half brother by shoving him through the pillars of the temple. At length he finally stops his rampage and runs out of steam.

Helius then sickens of the fight and takes up a sword. Ares is impressed by this act of courage, but he does not harm the boy. He takes the weapon away, but in the moment he is distracted, Perseus recovers and tackles him. Perseus then stabs Ares in the chest with a knife and suffocates him with a choke hold. Unable to recover from such traumas, Ares finally weakens. Perseus then strips Ares of the thunderbolt and impales him with it, killing the God of War.

"He's slaughtered innocents for centuries, it's all he knows. I can't beat him" - Perseus

Aside being able to teleport and hear prayers, Ares did not display the same supernatural abilities as his father and his uncles. Nevertheless he was a ferocious opponent and a seasoned fighter. He was one of the few Gods left over in their dying days, given his capacity to survive.

The God is depicted as a violent, uncontrollable deity who betrays Zeus. This does bear some relation to the myths, where Ares was the most hated God on Olympus.

His jealousy of Perseus likely stemmed from Ares believing himself superior, given that he was a God while Perseus was only a half God. But Ares was so filled with anger and hate that he soon became deluded, as he called Zeus' favouritism a betrayal and accused Perseus of taking away his father. Neither of these statements were true, showing that Ares was petty and unreasonable. He was highly sociopathic, as he was willing to kill his own father and his half brother just to prove a point.

His hot hotheadedness and pride were such that he often committed various blunders, such as underestimating his opponents. This allowed several characters to catch him off guard, including Agenor, Hades and Perseus.

He had no redeeming qualities whatsoever. The only hint of honour he displayed was when he was somewhat impressed by Helius daring to stand up to him. Rather than harm the boy, he was actually amused. 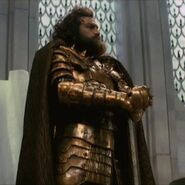 Ares played by Tammer Hassan in Clash of the Titans 2010