Edit
watch 01:36
We're Getting Mutants in the MCU - The Loop
Do you like this video?
Play Sound

Bubo, in Greek Mythology, was a clockwork replica of Athena's beloved magical owl of the same name.

Bubo was forged by Hephaestus and sent by Athena to aid Perseus in his quest to save the princess Andromeda in the original 1981 film.

After losing Athena’s helmet in Calibos’ swamp, Zeus orders Athena to give Perseus her owl, Bubo, as a replacement. She refuses, but agrees to have Hephaestus build a clockwork copy of Bubo to aid Perseus on his quest. Bubo helps him overcome numerous enemies, but not without a little fumbling on his part..

Bubo appears only briefly in the 2010 remake. While preparing for the quest, Perseus finds Bubo in a bin in the armory and, picking him up, asks the soldiers of Argos what it is. They tell him, "Just leave it." Bubo is unceremoniously tossed away.

Bubo appears in the 2012 sequel, in Hephaestus´ forge, this was because he was seen to be "The Fallen One's only friend, to whom Hephaestus talked frequently.

Wrath of the Titans [] 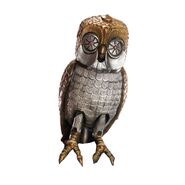 Bubo in Clash of the Titans (1981 film)
Community content is available under CC-BY-SA unless otherwise noted.
Advertisement