Edit
Clash of the Titans 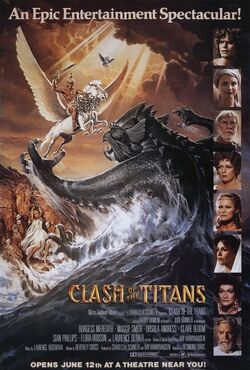 Clash of the Titans is a 1981 film based on the Greek myths of Perseus and his battles against Medusa and the Kraken to save the Princess Andromeda. It was released on June 12, 1981. The movie was remade for a 2010 release.

At the beginning of the film, King Acrisius of Argos (Donald Houston) imprisons his daughter Danae (Vida Taylor) to avert a prophecy that he would die if his daughter had a son. When the god Zeus (Laurence Olivier) impregnates her, Acrisius sends his daughter and his newborn grandson Perseus to sea in a wooden coffin. In retribution, Zeus kills Acrisius and orders Poseidon (Jack Gwillim), to release a Kraken to destroy Argos. Meanwhile, Danaë and Perseus safely float to the island of Seriphos, where Perseus grows to adulthood.

Calibos (Neil McCarthy), son of the sea goddess Thetis (Maggie Smith), is a young man engaged to marry Princess Andromeda (Judi Bowker), the daughter of Queen Cassiopeia (Sian Phillips) and heir to the rich city of Joppa; but has destroyed diverse creatures including most of Zeus's flying horses (excepting Pegasus only ). To punish him, Zeus transforms Calibos into a satyr-like creature later exiled by his people. In revenge, Thetis transports Perseus (Harry Hamlin) from Seriphos to Joppa, where he learns that Andromeda cannot marry unless her suitor successfully answers a riddle, whose failures are burned at the stake. Perseus, wearing a helmet that renders its wearer invisible, captures Pegasus and follows Andromeda to learn a new riddle from Calibos. Perseus is nearly killed by Calibos but escapes, losing his helmet in the process.

Perseus presents himself as suitor and correctly answers the riddle, presenting the severed hand of Calibos - Calibos' ring is the answer to the riddle. Perseus wins Andromeda's hand in marriage. Calibos, finding that Thetis cannot act against Perseus, instead demands that she take vengeance on Joppa. At the wedding, Queen Cassiopeia compares Andromeda's beauty to that of Thetis herself, whereupon Thetis demands Andromeda be sacrificed to the Kraken on pain of Joppa's destruction.

Perseus seeks a way to defeat the , while Pegasus is captured by Calibos and his men. Zeus commands Athena (Susan Fleetwood) to give Perseus her owl Bubo; but she orders Hephaestus (Pat Roach) to build a mechanical replica of Bubo instead, who leads Perseus to the (Flora Robson, Anna Manahan, and Freda Jackson). By taking their magic eye Perseus forces them to reveal that the only way to defeat the Kraken is by using the head of the Gorgon, who in this version lives at the edge of the Underworld.

There, Perseus kills Medusa's canine guardian , who slays one of Perseus's companions; whereas two others die on encounter with Medusa herself. Perseus uses the reflective underside of his shield to deceive Medusa, decapitates her, and collects her head; but the shield is dissolved by her blood. As Perseus and his party set to return, Calibos enters their camp and punctures the cloak carrying Medusa's head, causing her blood to produce . Most of the men are killed; but Perseus slays the last scorpion and thereafter kills Calibos.

Weakened by his struggle, Perseus sends Bubo to bring Pegasus; this Bubo does, and later diverts the Kraken until Perseus appears on Pegasus. In the subsequent battle, Bubo and Perseus use Medusa's head to turn the Kraken into stone, and free Andromeda.

The gods predict that Perseus and Andromeda will live happily, rule wisely, and produce children, and Zeus forbids the other gods to pursue vengeance against them. The likenesses of Perseus, Andromeda, Pegasus, and Cassiopeia appear as constellations.

Ray Harryhausen used the special effects technique of stop motion animation to create the various creatures in Clash of the Titans. Harryhausen was also co-producer of the film, and retired from filmmaking shortly after the movie was released, making this his last main feature film. Despite the mechanical owl Bubo's similarities to the droid R2-D2 of the 1977 film Star Wars, Harryhausen claimed that Bubo was created before Star Wars was released.

A sequel, Force of the Trojans, detailing Aeneas' mythological journey after the fall of Troy, was proposed to MGM in 1984, but never produced. 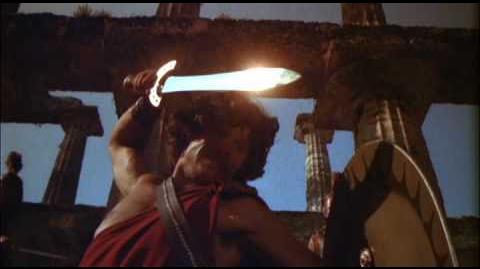