Start a Wiki
Clash of the Titans 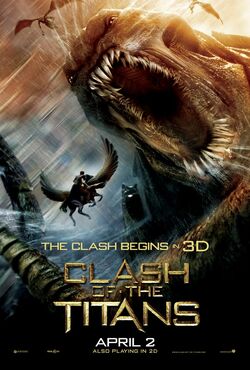 Clash of the Titans is the 2010 remake of the 1981 film of the same name. It was released on April 2, 2010. The story is very loosely based on the Greek myth of Perseus. Directed by Louis Leterrier and starring Sam Worthington.

In ancient times, the gods led by Zeus (Liam Neeson), Poseidon (Danny Huston) and Hades (Ralph Fiennes) betrayed their parents, the Titans, and banished them to the Underworld with the help of the Kraken, a sea monster born of Hades. The gods divided the Universe among themselves; Zeus took the skies, Poseidon took the seas, and Hades, tricked by Zeus, was left with the Underworld. The gods created the mortals, whose faith in them assured their immortality. However, as time passed, mortals began to question them.

A fisherman by name of Spyros (Pete Postlethwaite) finds a casket afloat in the sea, bearing a baby still living and clasped in the arms of his mother’s corpse. Spyros and his wife Marmara (Elizabeth McGovern) raise the baby as their own and name him "Perseus".

Years later, Perseus (Sam Worthington) is fishing with his family when they witness soldiers from the city of Argos destroying a Statue of Zeus. The gods, infuriated at this desecration, unleash the Furies - flying beasts who pursue mortal sinners. The soldiers are attacked and slaughtered by the Furies. The Furies merge and take the form of Hades, who destroys the ship Perseus and his family are on. His family perishes, but Perseus survives and is found by other survivors, soldiers from Argos led by Draco (Mads Mikkelsen).

Perseus is brought before King Kepheus (Vincent Regan) and Queen Cassiopeia (Polly Walker) who are celebrating the campaign against the gods. The revelry is cut short by the arrival of Hades, who has been given leave by Zeus to punish the mortals for their defiance of the gods. Hades proclaims that in the upcoming solar eclipse, he will unleash the Kraken against Argos unless the Princess Andromeda (Alexa Davalos) is offered as a sacrifice. Before leaving, he reveals that Perseus is a demigod.

Perseus is imprisoned by Draco and in captivity meets Io (Gemma Arterton) who tells him of his origin. Many years before, King Acrisius (Jason Flemyng) also tried declaring war against the gods. To punish him, Zeus impersonated Acrisius and impregnated his wife, Queen Dänae (Tine Stapelfeldt). Acrisius, driven mad with rage, orders the execution of Dänae and the newborn baby and casts them into the sea in a coffin. As punishment for his continued defiance, Zeus also strikes Acrisius with lightning, transforming him into a monster. Io also reveals that she was cursed with immortality after refusing to give in to Poseidon's advances and has watched over Perseus his entire life, beginning with watching from ashore as his adoptive parents rescue him from the floating coffin, to the present, always protecting him, as he is prophesized to be the only one able to stand up to the Gods.

As the Cult of Hades, led by the insane Prokopion (Luke Treadaway), grows in number and demands Andromeda's sacrifice, a desperate Kepheus asks Perseus to lead the King's Guard to visit the Stygian Witches in order to discover a way to kill the Kraken. Perseus - wishing to avenge the death of his family - accepts. Perseus and the guards head off on their quest joined by Ottoman monster hunters, Ozal (Ashraf Barhom) and Kucuk (Mouloud Achour). Hades, in hopes of stopping Perseus, finds Acrisius, now known as Calibos, and grants him superhuman abilities in exchange for Calibos assuring Perseus will die before he reaches the Witches.

Zeus is convinced by Apollo (Luke Evans), who doesn't trust Hades, to give Perseus a chance and presents him with an enchanted sword forged on Mount Olympus and a winged horse named Pegasus. Perseus refuses both gifts but a wise Draco puts the sword into safekeeping. Shortly thereafter, they are attacked by Calibos. Perseus barely manages to hold him at bay and is bitten by Calibos in a desperate move. Draco severs Calibos's hand causing Calibos to flee. The band gives chase only to be attacked by Scorpiochs summoned by Calibos’s blood. Although they manage to kill some of them, they are ultimately surrounded by even larger scorpions until they are saved by the Djinn, a band of Arabic desert sorcerers led by Sheikh Sulieman (Ian Whyte). The Djinn, also wishing for the gods' defeat, lends their aid to Perseus and his hand.

The group arrives at the lair of the Stygian Witches and learns from them that the only possibility for killing the Kraken is with the head of a gorgon Medusa who is residing in a temple in the Underworld. Medusa is able to turn any living creature into stone by making eye contact, and thus capturing her head is essential for battling the Kraken. As they prepare to head into the Underworld, Perseus is approached by Apollo, who gives him a golden drachma which is a fare for Charon, the ferryman of the Underworld.

Perseus, Io, Sulieman, Draco and his remaining men Solon (Liam Cunningham), Eusebios (Nicholas Hoult) and Ixas (Hans Matheson) arrive at the Underworld and the men enter Medusa's Lair while Io remains outside, unable to enter. Medusa (Natalia Vodianova) kills Solon, (who was shot and falls into the fire), Eusebios and Ixas (who have turned to stone), and wounds the shot Draco. Sulieman and Draco wound Medusa and turn to stone, making the ultimate sacrifice. The badly wounded Medusa is beheaded by Perseus, who takes her head. The rest of the body falls into the fire. As he is leaving the temple, he witnesses Calibos creep up behind and murder Io. Perseus and Calibos engage in mortal combat with Calibos having the upper hand and disarming Perseus. Finally coming to terms with who he is, Perseus picks up the Olympian sword and pierces Calibos through the heart, turning him back into Acrisius in human form restoring him to sanity and humility for one last moment.

After saying his goodbyes to the dying Io, who urges him forward to save Andromeda and Argos before she dissolves into an ethereal vapor, Perseus mounts Pegasus and hastens back to Argos. In the meantime, Zeus has ordered the Kraken's release. The Cult of Hades in Argos invade the palace and seize Andromeda to sacrifice her to the Kraken. While the Kraken ravages Argos, Hades reveals to Zeus that while they have been surviving on the people’s adoration, he has been feeding on people's fear and his monster has been channeling even more fear. While the gods have become weaker, Hades has now grown powerful enough to take on Mount Olympus and even destroy it in revenge for his betrayal so many years before. Realizing his mistake too late, Zeus can only rely on Perseus.

In Argos, Hades unleashes the Furies against Perseus and they manage to snag away from him the sack holding Medusa’s head. In an intense aerial chase with Perseus riding Pegasus, he manages to retrieve the bag, just in time for the Kraken to fully emerge. The Kraken causes massive damage to Argos before heading to devour Andromeda. Before the Kraken is able to eat Andromeda, Perseus races to open the bag, unveil the head of Medusa and face it to the Kraken, who makes eye contact, slowly turning it into stone. The massive statue cracks and the falling debris kills Prokopion and Kepheus, while Andromeda falls into the sea. Hades appears to confront Perseus. Perseus in defiance raises his sword to the heavens and calling upon Zeus, throws his sword at Hades. A lightning bolt engulfs the sword and banishes Hades to the Underworld once more.

The music for this movie was composed by Ramin Djawadi and has 22 songs.

Main Article: Clash of the Titans: The Videogame

Main Article: Wrath of the Titans

It was learned that a sequel was in the works in March 2010 when the announcement was made that the film will start a trilogy. In June 2010, Warner Bros. announced the sequel with Davide Leslie Johnson and Dan Mauzeau as the writers. Louis Letterier will instead be an executive producer, leaving Jonathan Liesbesman to direct. Another change is that filming will be carried out entirely in 3D due to negative reviews of the first film's post-production conversion. Wrath of the Titans was released on March 30, 2012.

Add a photo to this gallery 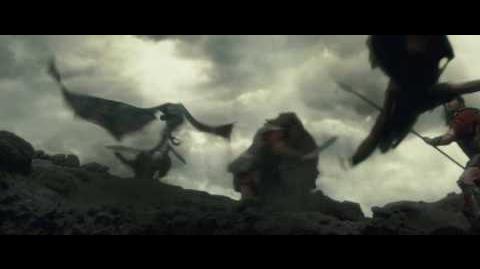 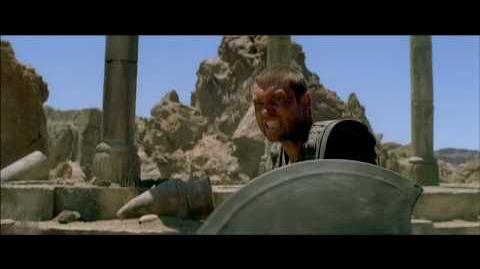 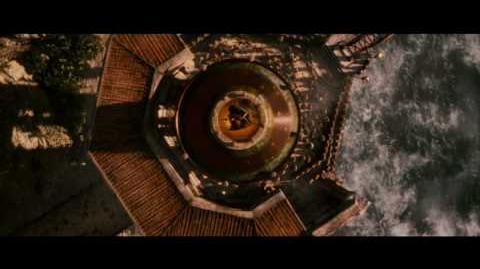 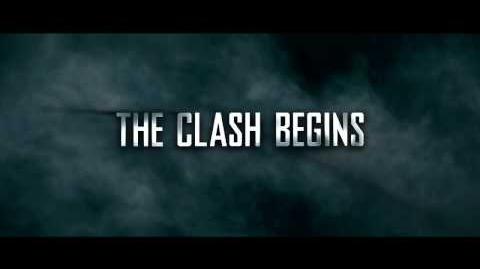 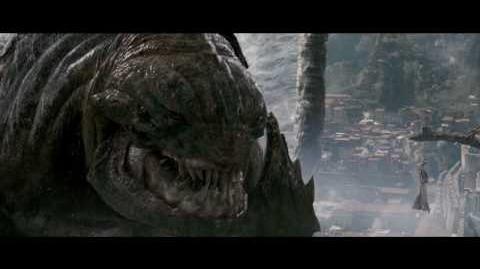 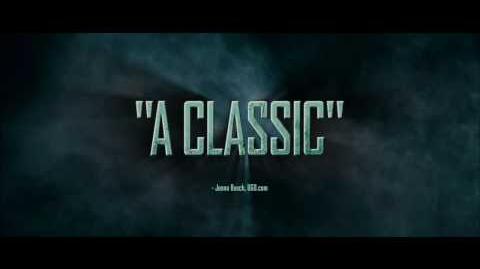 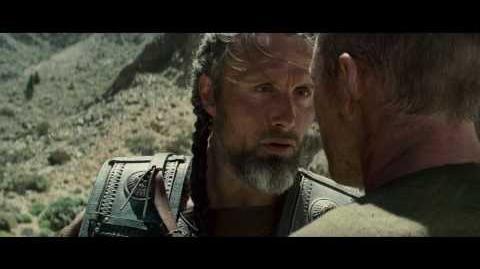