The official site description for the Cyclops reads as follows:

The foul, fearsome Cyclops are a breed of cannibal giants endowed with brute strength and a single eye in the middle of their foreheads. So powerful are these primitive monsters, Uranus imprisoned them in an underworld abyss where they were guarded by a dragon.

Once unleashed from their dungeon by Zeus, the massive masons forged extraordinarily potent weapons for the gods - including Zeus' lightning bolts, Hades' helmet of invisibility and Poseidon's trident - and joined the fight to overthrow the Titans.

There were three main Cyclopes in Wrath of the Titans. When Agenor led Perseus, Andromeda and other argive soldiers to a hidden island by using Poseidon's Trident, at their arrival they encountered a set of traps. Agenor was captured by one of the traps which was a wooden cage. The cage was attached to a set of strings, which were pulled by unknown forces into the woods. Perseus followed the trail of the strings, and he and the argive soldiers found a Cyclops. The Cyclops was responsible for the existence of said traps, the argive soldiers faced the Cyclops, but he overpower them easily. Perseus confronted the Cyclops while a second Cyclops was battling Andromeda and Korrina. Perseus managed to defeat the Cyclops by using the Cyclop's very own trap (a tree trunk attached to a string). The second Cyclops came to aid his defeated brother, Perseus then threatened the fallen Cyclops with the trident. An elder Cyclops appeared and saw the trident, remembering the trident belongs to Poseidon (an ally), the elder Cyclops ordered the other Cyclopes to stand down. The Cyclopes then helped Perseus and led him to Hephaestus.

Wrath of the Titans: Cyclops[]

During the promotion stage prior to the film debut, various official featurettes were made for the creatures featured in Wrath of the Titans, including the Cyclopes.

The Cyclopes appear as allies on Titans Attack, the micro online game for Wrath of the Titans. After the player manages to defeat the first wave of Makhai, the Cyclopes appear and aid the Argive army legion in battling the remaining Makhai on the camp.

Wrath of the Titans: Cyclops[]

A cyclopes with a spiked wooden club

The main Cyclops vs a pack of T-Rex

Other cyclopes cooking some pirates 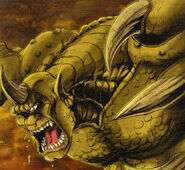 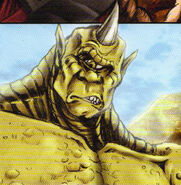 The main cyclops been attacked by the pirates

Wrath of the Titans (film)[]

Early concept for the Cyclops in Wrath of the Titans, by artist Jerad S. Marantz

A Cyclops as it appears on Clash of the Titans: The Videogame

Perseus battling the second Cyclops on the video game.