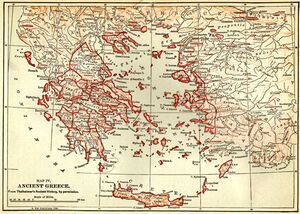 Greece is a civilization belonging to a period of Greek history that lasted from the Archaic period of the 8th to 6th centuries BC to the end of antiquity (ca. 600 AD). Immediately following this period was the beginning of the Early Middle Ages and the Byzantine era. Included in Ancient Greece is the period of Classical Greece, which flourished during the 5th to 4th centuries BC. Classical Greece began with the repelling of a Persian invasion by Athenian leadership. Because of conquests by Alexander the Great, Hellenistic civilization flourished from Central Asia to the western end of the Mediterranean Sea.

The first traces of human habitation in Greece appeared during the Paleolithic Age (approx. 120000 - 10000 B.C.). During the Neolithic Age that followed (approx. 7000 - 3000 B.C.), a plethora of Neolithic buildings spread throughout the country. Buildings and cemeteries have been discovered in Thessaly (Sesklo, Dimini), Macedonia, the Peloponnese, etc.

The beginning of the Bronze Age (approx. 3000-1100 B.C.) is marked by the appearance of the first urban centers in the Aegean region (Poliochni on Limnos). Flourishing settlements were found on Crete, Mainland Greece, the Cyclades and the Northeastern Aegean, regions where characteristic cultural patterns developed.

At the beginning of the 2nd Millennium B.C., organized palatial societies appeared on Minoan Crete, resulting in the development of the first systematic scripts. The Minoans, with Knossos Palace as their epicenter, developed a communications network with races from the Eastern Mediterranean region, adopted certain elements and in turn decisively influenced cultures on the Greek mainland and the islands of the Aegean.

On Mainland Greece, the Mycenean Greeks –taking advantage of the destruction caused on Crete by the volcanic eruption on Santorini (around 1500 B.C.)- became the dominant force in the Aegean during the last centuries of the 2nd Millennium B.C.. The Mycenean acropolises (citadels) in Mycenae, Tiryns, Pylos, Thiva, Glas, Athens and Iolcus, then comprised the centers of the bureaucratically organized kingdoms.

The extensive destruction of the Mycenean centers around 1200 B.C. led to the decline of the Mycenean civilization and caused the population to migrate to the coastal regions of Asia Minor and Cyprus (1st Greek colonization). After approximately two centuries of economic and cultural inactivity, which also became known as the Dark Years (1150 - 900 B.C.), the Geometric Period then followed (9th - 8th Century B.C.). This was the beginning of the Greek Renaissance Years. This period was marked by the formation of the Greek City-States, the creation of the Greek alphabet and the composition of the Homeric epics (end of the 8th Century B.C.).

The Archaic Years that subsequently followed (7th - 6th Century B.C.) were a period of major social and political changes. The Greek City-States established colonies as far as Spain to the west, the Black Sea to the north and N. Africa to the south (2nd Greek colonization) and laid the foundations for the acme during the Classical Period.

The Classical Years (5th - 4th Century B.C.) were characterized by the cultural and political dominance of Athens, so much so that the second half of the 5th Century B.C. was subsequently called the “Golden Age” of Pericles. With the end of the Peloponnesian War in 404 B.C., Athens lost its leading role.

New forces emerged during the 4th Century B.C. The Macedonians, with Philip II and his son Alexander the Great, began to play a leading role in Greece. Alexander’s campaign to the East and the conquest of all the regions as far as the Indus River radically changed the situation in the world, as it was at that time.