Hades is a Greek god and the Ruler of the Underworld. He is brother to Zeus and Poseidon. He also appears in Clash of the Titans 2010 remake as the main antagonist.

A long time ago, before mortals existed, the Titans ruled the world. However, Kronos, King of the Titans, was warned of a prophecy where one of his six children would kill him and take control of the world from him. In response, Kronos began swallowing his children in hopes of preventing the prophecy from coming true. Hades was the first of his sibling to be devoured by his evil father and his brother Poseidon soon followed. However, Hades's mother, Rhea, saved the final child Zeus by tricking Kronos into swallowing a stone wrapped in a blanket while an eagle carried the real Zeus to safety. Poseidon and Hades grew up insde of their father's stomach while Zeus hid from Kronos. Years later, Hades was freed by Zeus when he gave Kronos a potion which made him vomit Hades and his siblings as well as the stone substituted for Zeus. After being freed, Hades went to the Underworld with Zeus and Poseidon and freed the cyclopes, who gave Hades the helmet of invisibility as a gift.

Later, Zeus, Poseidon, and Hades declared a ten year war on the Titans called the Titanomachy. During the Titanomachy, Hades, created a giant monster called the Kraken to help them against the Titans. Finally, after ten years of war, Zeus, Poseidon, and Hades finally defeated Kronos and banished their father and the Titans to Tartarus where they hoped they would remain imprisoned forever. Hades became God of the Underworld, Poseidon became God of the Seas, and Zeus became King of the Gods and God of the Sky. Zeus, as his frst act as ruler of the world, created mortals to populate the world.

As years passed, Hades began planning to kill Zeus and usurp control of the world from him. Many years later, Hades sent his Furies to an island where soldiers from Argos destroyed a statue of Zeus and obliterated them and a passing fisher boat, killing everyone on board except Perseus, who survived and washed up on the island where the soldiers took hm to Argos. Prior to this moment, Hades somehow knew that Perseus was the demigod son of Zeus. Later, Hades traveled to Argos where Perseus was present with Kepheus, the king of Argos, and his daughter, Andromeda. Hades threatned the mortals that he will unleash the Kraken on Argos unless Andromeda is sacrificed to it. With that being said, Hades used his powers to age queen Cassiopeia to death and revealed to Kepheus that Perseus is the son of Zeus before returning to the Underworld.

Later, Hades came into contact with Calibos, the ex-king of Argos, who was turned into the monster Calibos as punishment for defying Zeus. Hades offered Calibos a chance to serve him and he accepted. Because Hades saw Perseus, who was searching for the Stygian Witches with the Praetorian Guard in hopes of finding a way to kill the Kraken, as a threat to his plans, he ordered Calibos to hunt down and kill Perseus to prevent him from interfering with his plan to overthrow Zeus. Calibos attacked Perseus in the forest and killed several soldiers, but Draco severed his hand, forcing Calibos to escape. Calibos attacked Perseus a second time after Perseus decapitated Medusa and killed Io, but Perseus stabbed him through the heart and reverted him into his original mortal form before Acrisius fell to his doom.

After Calibos's death, Hades traveled to Olympus where he revealed his intentions to overthrow Zeus and take the throne from him. Hades teleported before Zeus could strike him and the Kraken was released. Hades then sent his Harpies to steal Medusa's head from Perseus to prevent him from defeating the Kraken, but Perseus retrieved it and flew on Pegasus to Argos to confront the Kraken. Just as Andromeda was about to be sacrificed, Perseus used Medusa's head to turn the Kraken to stone. Infuriated at Perseus, Hades confronted the hero himself vowing he would never defeat him. Perseus defied Hades and called upon Zeus to aid him just as he raised his godly sword. Zeus threw a lightning bolt from affar and merged it with Perseus's sword. Before Hades could strike Perseus down, the heroic demigod quickly threw his sword at Hades merged with Zeus's lightning bolt and struck him in the chest, and Hades was blasted down into the Underworld, his evil plans had ultimately failed. Hades survived and Perseus and Zeus both knew that Hades would eventually return to claim Olympus from his brother and exact revenge.

Perseus (Sam Worthington), a son of Zeus (Liam Neeson), lives as a fisherman after the death of his wife, Io (portrayed by Gemma Arterton in the previous film), with his young son, Helius (John Bell). Zeus visits Perseus and asks for his help, saying that humans are not praying to the gods and as a result the gods are losing their power and becoming mortal. They can no longer sustain the walls of Tartarus which are crumbling, and the imprisoned Titan Kronos will soon be free. Perseus, valuing his family's safety, refuses to get involved.

Zeus meets his brothers Hades (Ralph Fiennes) and Poseidon (Danny Huston), and his son Ares (Édgar Ramírez) in Tartarus. He asks Hades's help in rebuilding Tartarus's walls, but Hades rejects the offer and attacks Zeus. Ares betrays Zeus, imprisoning him and stealing his thunderbolt. Hades and Ares plan to make a deal with Kronos: in exchange for remaining immortal, they will drain Zeus's divine power to revive Kronos. The walls of Tartarus break, unleashing monsters onto the world.

After killing a Chimera that attacked his village, Perseus travels to meet his father. He instead finds a dying Poseidon who informs him of the circumstances and tells him to find his Demigod son Agenor (Toby Kebbell) who will lead him to Hephaestus, who knows the way into Tartarus. Poseidon then gives Perseus his trident and succumbs to the injuries he sustained when meeting Hades. Perseus, Andromeda (Rosamund Pike), and Agenor set out to find Hephaestus on a hidden island. Agenor explains that Hephaestus created three weapons which Zeus, Hades, and Poseidon wield: Zeus's thunderbolt, Hades's pitchfork, and Poseidon's trident, and that these weapons can jointly form the Spear of Trium, the only weapon that can defeat Kronos. After an encounter with Cyclopes, the travelers eventually meet the now mortal Hephaestus (Bill Nighy) and reach the entrance of a labyrinth leading to Tartarus. Hephaestus sacrifices himself during an attack by Ares to enable Perseus, Andromeda, and Agenor to enter the labyrinth. Once inside the labyrinth they encounter a Minotaur that attacks the group, but Perseus manages to kill it.

The group eventually enters Tartarus. Meanwhile, Zeus has been almost entirely drained of power as Kronos awakens. Zeus apologizes to Hades for banishing him to the underworld and asks his forgiveness, as he has forgiven Hades for his actions. Hades decides to help Zeus and stop Kronos in contrast to Ares, who still wants to proceed to the former's revival. Perseus arrives and frees Zeus. Ares wounds Zeus with Hades' pitchfork, allowing Perseus to obtain it before he and the others escape Tartarus with Zeus.

Aiming to retrieve Zeus' thunderbolt from Ares in order to defeat Kronos, Perseus challenges him to a duel. Ares accepts. Meanwhile, Andromeda's army is overwhelmed by the Makhai. Hades revives Zeus and together they defeat the creatures. Kronos appears and begins to attack Andromeda's army. Zeus and Hades hold off Kronos while Perseus duels Ares eventually killing him with the thunderbolt. Combining the gods' weapons into the Spear of Trium, Perseus destroys Kronos by traveling to its heart and throwing the spear into it.

Zeus reconciles with Perseus and then dies of his wounds. Hades tells Perseus that now he is powerless and leaves. Perseus kisses Andromeda, and Helius tells his father that he wants to return to his life as a fisherman, but Perseus tells him they can't. Perseus encourages Helius to be proud of himself, as his son and the grandson of Zeus. The film ends with Perseus giving his sword to Helius.

Clash of the Titans: Prequel ComicEdit 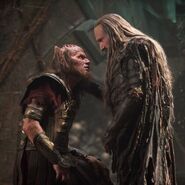 Hades and Calibos
Add a photo to this gallery

Add a photo to this gallery
Retrieved from "https://clash-of-the-titans.fandom.com/wiki/Hades?oldid=11515"
Community content is available under CC-BY-SA unless otherwise noted.