Kronos is the leader of the Titans, and father to Hades, Poseidon and Zeus.

Kronos is the king of the Titans, father of the Gods. Kronos current physical form is composed of lava and molten rock. Lines of lava surround Kronos' body, mouth and eyes, which would suggest that the inside part of his body is completely composed of lava. He is capable of projecting massive waves of lava from his arms. It is also seen that Kronos can spawn hordes of Makhai from his very own flesh, or at least project them from the rivers of lava on Tartarus. Both Makhai and Chimeras are seen to be affiliated to Kronos rather than Hades.

Kronos is the Greek Titan of Time and was the leader and the youngest of the first generation of the divine descendants of Gaia, Earth, and Ouranus, Heaven known as The Titans. He is the father of Zeus, Hades, and Poseidon. According to mythology, he overthrew his father and ruled until he in turn was overthrown by his own sons and imprisoned in Tartarus.

Kronos is usually depicted with a sickle or scythe, which is also the instrument he is said to have used to castrate and depose Ouranus, his father. A festival called Kronia was held in his honor in Athens, on the twelfth day of the month of Hekatombaion, to celebrate the harvest. This suggests that as a result of his association with the virtuous Golden Age, Kronos continued to preside as a patron of harvest. He can also be identified in classical antiquity with the Roman deity Saturn.

Titans were originally the offspring of Gaia (the Earth-mother) and Ouranos (the Sky-father) and were the first race of divine beings. Kronos and Rhea produced the first generation of Olympians whom Kronos, out of fear of being overthrown, then ate, save Zeus. Zeus killed Kronos and saved his siblings.

At first the relationship between the Olympians and Titans were relatively amicable, but eventually the Titanomachy, the war against the Titans, broke out, in which the Titans were finally subdued and punished.

Hades and Zeus had Kronos imprisoned in the depths of the Underworld. There the Titan-King was bound to the walls of Tartarus and stripped of his powers. He appeared to be in a semi-conscious state, as he was still able to use his voice to communicate with Hades.

"Great Kronos, father, we have delivered Zeus, your son. As you ordered"

Off screen, Kronos reaches out to his son Hades and offers to spare him if he can aid in his escape from Tartarus. Hades is already at odds with Zeus, so he agrees to the deal and Zeus is captured. Once Hades and Ares bring Zeus to Kronos, the Titan King begins to drain Zeus' power.

The process is a lengthy one, but at last Kronos begins to awaken from his hibernation. The Titan begins to break free from the mountain he is bound to. His first act is to try and crush Zeus with his flaming hand, but Zeus is freed by Perseus and Andromeda. Ares tries to stop them, but Hades has a change of heart and thwarts him. Kronos' outstretched hand destroys the now vacant altar, whereupon the Titan realises that Hades has aided Zeus' escape. Despite this, the Titan is simply content with escaping the Underworld. Kronos begins to climb his way to the surface.

Kronos emerges in a valley, where his Makhai are already battling Andromeda's army. But Hades and Zeus destroy the Makhai and they confront their father as he emerges. Kronos faces his sons once again as Zeus blasts him with lightning. Kronos goes on a rampage, first pulverizing a mountain with a swing of his arm. When Perseus arrives, Kronos swings his mighty arms, unleashing rivers of lava. The deluge of lava and fireballs rain down on Andromeda's troops, but Zeus and Hades are able to divert some of the fireballs. When Zeus and Hades combine their powers, they manage to stagger Kronos, but the Titan strikes the ground and sends shock-waves through the land. Zeus attempts to shield himself and Hades, but Zeus is overcome and injured.

Perseus then approaches Kronos with the Spear of Triam. Kronos attempts to incinerate him by breathing fire, but Perseus uses the spear to pass through it and into Kronos' mouth. Perseus tosses the spear down Kronos' throat, which causes him to convulse and explode. Zeus later dies from his wounds, leaving Hades as the only son of Kronos remaining.

According to Hephaestus, if Kronos is let loose, has enough power to scatter the Earth across the universe. In the past, the gods needed the aid of the Kraken to defeat Kronos and the rest of the titans. It is proven that not even the combined powers of Hades and Zeus are enough to stop Kronos, The Spear of Triam is the only known weapon capable of defeating him. Kronos is one of the most powerful beings the series.

Kronos appears on the Titans Attack online game on the Wrath of the Titans official site. On the game, Kronos is not a playable character nor a computer controlled enemy, he acts simply as a background character.

During the promotion stage prior to the film's debut, on the Creatures Unleashed campaign, various official featurettes were made for the creatures and Titans featured in Wrath of the Titans, including Kronos. 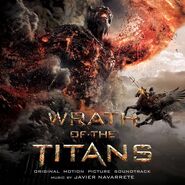