Clash of the Titans Wiki
Register
Don't have an account?
Sign In
Advertisement
in: Creatures & Titans, Monsters

The Minotaur, in Greek Mythology, was a monster of considerable size and strength. Queen Pasiphae of Crete had been inspired by a vengeful god to fall in love with a bull, with the result that the Minotaur was born- a monster half-man and half-bull that haunted the Labyrinth of King Minos, beneath the Palace of Knossos. It was built by Daedalos to contain the Minotaur, and had many traps and puzzles, rendering it impossible for the Minotaur, or the Minotaur's prey to escape from.

The official site description of the Minotaur read as follows:

A ferocious combination of man and beast, the Minotaur was forged from the unholy union of insolence and unrequited love. Poseidon gifted King Minos of Crete with a snow-white bull, but when Minos failed to sacrifice it as a sign of respect to the god, Poseidon caused the King's wife to fall in madly love with the alluring creature, and their spawn took shape as a powerful bull-headed barbarian.

The Minotaur is imprisoned at the center of an elaborate Labyrinth designed by the fallen god Hephaestus, who locked the ravenous man-beast within its twisting passages to safeguard against intruders. There the shape-shifting Minotaur hungrily stalks prey that wanders helplessly within the maze, playing tricks on their minds before mercilessly killing his victims.

The Minotaur demonstrated a limited level of Telepathy, demonstrated when he played with the minds of Andromeda, Agenor and mainly Perseus when they were inside the Labyrinth. The Minotaur can influence on his victims for them to see images of their loved ones inside the labyrinth. He can also mimic the voices of other people, by somehow reading his victims thoughts.

The Minotaur also has a degree of superhuman strength and stamina, enough to ram at his enemies again and again without stopping. His strength is such that when he rammed at Perseus, the Minotaur got his horns stuck on one of the walls of the labyrinth. Despite his superhuman nature, he is not invulnerable, as Perseus managed to brake one of his horns and used it to stab him to death.

Wrath of the Titans: Revenge of Medusa II[]

Journey Through the Labyrinth[]

The Minotaur appears on the online game Journey Through the Labyrinth of the Wrath of the Titans official site.

During the promotion stage prior to the film's debut, on the Creatures Unleashed campaign, various official featurettes were made for the creatures featured in Wrath of the Titans, including the Minotaur.

Early concept of the Minotaur for the Wrath of the Titans film. 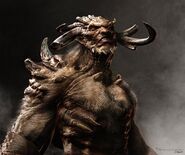 Early concept art for the Minotaur by artist Jerad S. Marantz during the beginning of the project

Concept art for the Minotaur